STEPHEN CURRY IS INSPIRED THAT HIS SON WILL ONE DAY FOLLOW IN HIS FOOTSTEPS
Golf Is The King Of Canon's Heart Right Now, Though 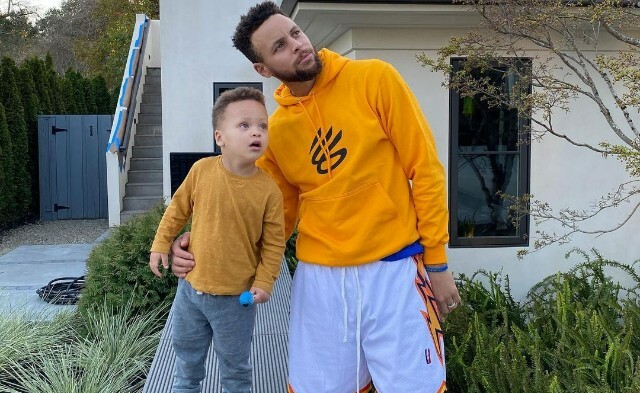 Stephen Curry is inspired that his son, Canon, will one day follow in his footsteps as a professional athlete. The NBA star, however, is not completely sold on his little one playing basketball for a living.

“My daughters, Riley and Ryan, neither one of them want to play basketball,” Curry shared during his recent segment on Race In America: A Candid Conversation. “My son, he loves basketball, he loves golf, he loves all that, the same way I did,” Stephen revealed.

Tiger Woods and his son, Charlie Woods, inspired Stephen Curry that, perhaps, he would one day play alongside his son in professional sports. Tiger and Charlie competed together in the PNC Championship last year, which was nothing short of adorable. Charlie exhibited some of the same mannerisms as his father while playing golf at an advanced level.

“As a father, you look forward to any opportunity to have an experience like that with your kid,” Stephen said of Tiger Woods and Charlie Woods playing on the golf course together. “You know they’re having fun and they’re enjoying themselves and you can participate with them in whatever it is,” the Curry said.

Stephen would love to share the bond of playing basketball alongside his son. Canon Curry, however, is presently in absolute love with golf.

“We have a little backyard net, where he can get some swings in. He loves it,” Curry shared during his segment on Race In America: A Candid Conversation. “When I come home, that’s like the first thing he says: ‘Daddy go play golf? Daddy go play golf?’”

It is not as if Canon Curry does not know what his dad does for a living. “He knows I play basketball and he’s been to a couple of games and he’s been able to enjoy watching me play with my jersey on and be out there hooping,” Stephen told the press. “But golf is possibly his first love,” the celebrity father said of his son’s current passion.

Stephen and his wife Ayesha Curry have three kids – Canon, Riley, and Ryan – together. Canon is the celebrity couple’s only son and youngest child.