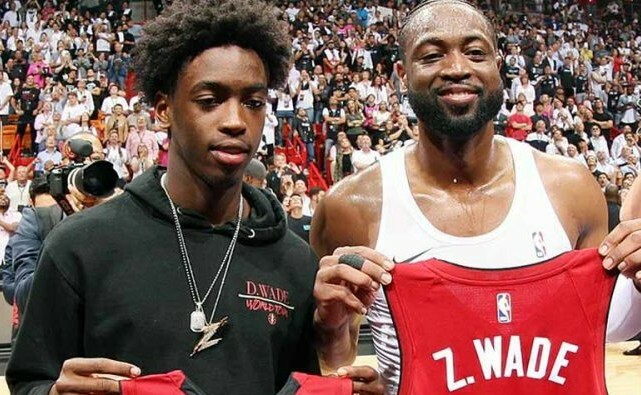 Dwyane Wade’s son, Zaire Wade, has joined the G League affiliate of the Utah Jazz. The up-and-coming player took to Instagram to celebrate his recent accomplishment.

KHLOE KARDASHIAN IS TEACHING HER DAUGHTER ABOUT THE VALUE OF FAMILY

“God’s plan,” Zaire wrote online. The NBA’s G League is the association’s official minor league. Those accepted into the league are one step closer to playing in the major league.

Dwyane Wade became part owner of the Utah Jazz in April. The celebrity father told PEOPLE last year that he plans to be involved in his son’s quest to be a professional basketball player.

“I’m definitely not in the backseat,” Wade told the media. “He’s in the driver’s seat,” the celebrity father continued. “If basketball is the ultimate goal, then I’m just trying to help him along the way, understanding there’s so many different ways to get to this goal. It’s not just one way, it’s not go through high school, be a superstar. Go into college, be a superstar. Get drafted No. 1 and now you’re there.”

Dwyane Wade further explained, “There’s so many different ways to get to the NBA or to get that path. So, [I’m] just trying to help him navigate through expectations that the world has put on him and that he puts on himself because of his last name.”

Zaire certainly worked to establish himself as a force with which to be reckoned during his high school years of playing basketball. It was just last year Zaire delved into the motivation behind his decision to stop playing basketball for Sierra Canyon after recovering from an ankle injury that forced him to sit out a few games.

“I felt like me and my family, we did as much as we could to rehab as fast as I could. It was supposed to be like a six to eight-week injury, but I rehabbed in like three, three and a half,” Zaire shared. “I felt like I did everything I could to stay focused and get back on the court fast enough,” the young athlete said. “I felt like I deserved a little more playing time than what I was given after a while.”

Zaire will soon have the opportunity to showcase his skills in a different sphere. The regular season for the NBA begins next week.