LEBRON JAMES CAN RELATE TO THE FATHER-SON MOMENTS IN ‘SPACE JAM: A NEW LEGACY’

LEBRON JAMES CAN RELATE TO THE FATHER-SON MOMENTS IN ‘SPACE JAM: A NEW LEGACY’

"It's A Huge Family Movie" 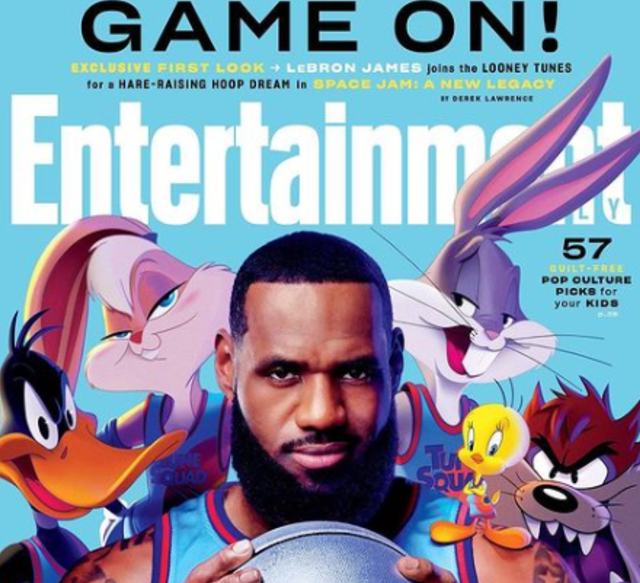 Space Jam: A New Legacy, starring LeBron James and others, is expected to make its debut this summer. James shared an Instagram post from his recent Entertainment Weekly cover that highlighted the forthcoming film.

“Y’all not ready for this squad,” James told his social media fans. The magazine’s cover image showed LeBron holding a ball while surrounded by all of the animated characters that made Space Jam (1996) great.

Many cannot forget the storyline of Space Jam that combined some of the real-life events of Michael Jordan’s career and personal affairs with beloved WB characters. The movie continues to be a classic with some of those who grew up in the 90s era still knowing the words to songs from the hit film.

“There were a lot of films for me, but Space Jam was definitely up there,” James tells Entertainment Weekly. “Just growing up and loving the NBA, and obviously loving Michael Jordan, and loving the Looney Tunes, it was an automatic and a very organic blend between the two worlds,” the star athlete shares. “It definitely had a big part of my childhood.”

LeBron James is the ideal NBA player to star in what was once Michael Jordan’s place. Not only does the Los Angeles Lakers player dominate on the court, but James is a role model away from the spotlight as well. It was just three years ago that LeBron launched I Promise School in Akron, Ohio. The NBA star’s foundation put up the needed $2 million capital to get the school started. James has since found support from others and expanded the institution to offer education for first through eighth grade students.

Knowledge and family seem to be significant factors in the James household. Such is the reason why LeBron is so excited about Space Jam: A New Legacy.

“This movie is going to surprise a lot of people because it brings up a lot about family and the dynamic between a father and son,” James tells Entertainment Weekly. “There are parents who want to push their kids to do certain things because this is what they do, but sometimes you have to look into a kid and be able to have an open mind and ear to help them become the thing they’ve dreamed of,” the celebrity father continued.

“There’s a lot of father-son moments that people are going to relate to, and I’m looking forward to people just getting the raw emotion out of it, and understanding and seeing what it’s all about,” James says of the film. “It’s a huge family movie, and I can’t wait for people to get together and have their popcorn and everything that comes with it. It’s going to be exciting.”

Space Jam: A New Legacy is expected to premiere in July.